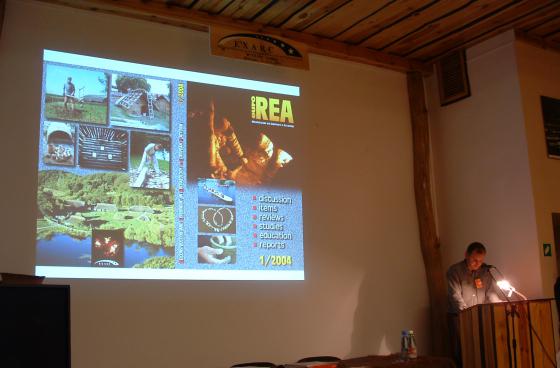 Since 2000, the Czech Society for Experimental Archaeology (SEA), member of EXARC, publishes a yearbook on (re)construction and experiment in archaeology. The Czech book became more known abroad but the information was mostly inaccessible – even though articles were summarised in 3 languages and published on the Internet. Ever more foreign contributors found their way to publish in Czechia, but the need was felt for serving a larger public. The idea took shape to "go European". In 2004, the first "EuroREA" was published – a joint venture between SEA & EXARC: a pocket of 200+ pages, mostly in English with an occasional French or German article and always summarised in the other two languages. The editorial board is fully international with 12 members from 8 countries, including native speaking professionals in the three languages EuroREA is using.

Articles included a discussion on the problems of measuring physical performance in experimental archaeology, pottery manufacture and firing, examining the ruins of two (re)constructed houses, an education introduction to the danish historical workshops, contemplations on the responsibillities of acurately interpreting life in full scale and a report on the Archaeopark Liboc in Prague. Several books were reviewed, like one on virtually the Ice Age and on rebuilding a Roman Villa at Butser's.