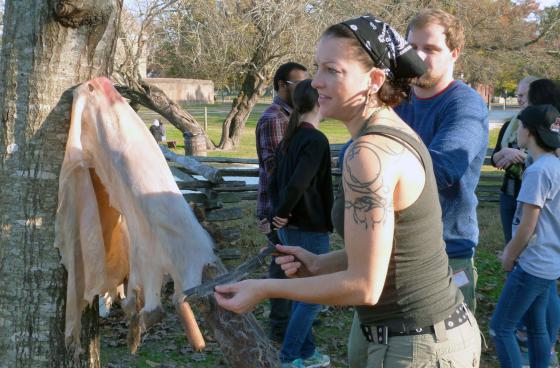 18 & 19 November, a colourful crowd attended the Reconstructive and Experimental Archaeology Conference (REARC). Venue was the world famous living history museum Colonial Williamsburg in Virginia. In total, about 90 people participated, of which about 40 students. People travelled from West Coast to East Coast to join, and also several EXARC members from Europe were present.

On the first day, with 16 papers, a broad palette of experiments and reconstructions were brought for the spotlights. Thanks to the good facilities at Colonial Williamsburg, everybody could stay at or near the museum where there were plenty restaurants and hotels.

Saturday was a wonderful and sunshiny day with demonstrations of ancient crafts in three locations throughout the old city of Colonial Williamsburg. Everybody enjoyed the food demonstration, the iron smelting, but also the textile demonstrations, bow making experts and many more. This truly brought together the participants, tourists and also employees of the museum. An evening barbecue was the cherry on the conference.

REARC will return to Colonial Williamsburg, will you?

The 2016 REARC conference hosted by EXARC in Colonial Williamsburg, Virginia, from November 18th to the 20th, was an unforgettable experience. After a midnight drive and a short night's rest it was time to listen to papers... Read more