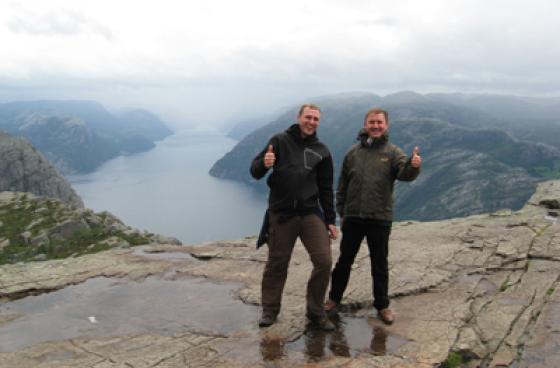 Once upon a time a man in Landa was blamed for not have been swimming in the ice cold fjords of a country nearly next to the Northpole. Although he tried to explain the hard conditions, nobody believed him, because there have been two great story tellers which swam in the fjord. Nobody foreboded, that those handsome women have been meermaids trying to cluck men to their kingdom and proof death. Because nobody have known this, the man was laughed at and so he became sad.
One day a wise man came and told him a way how to restore his honor. He told him about a rock, nobody else was brave enough to overmaster. The man was very anxious, but the wise man promised him to go with him. Elements went crazy and tried to thwart these brave men. But they resist and began to climb. As they began, the wheater cleared up, as they lost their way a brave hiker guided them, as they where thirsty, they found clear and cold water. So it came, that those men mastered the mountain and all their comrades gratulated them overwhelmingly.
And the moral of this story is: There is allways a chance. You just need to start and there will allways be a helping hand and a solution. This project is helping us in a quite similar way. We just started. And I've seen more helping hands than problems. Our goal is not to crouch in our ivory tower, our goal is to gain interest in our origins, interest in ourselves.
Thats why especially such story telling workshops are important, more than I suggested before.

Thanks to all our great hosts in Landa, to all the people I spoke and to Roeland, our hard working coordinator.