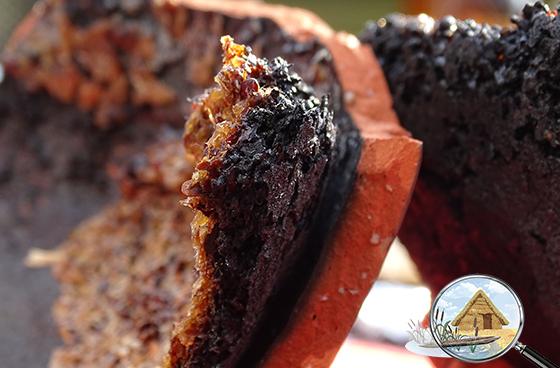 In December of last year, the team of the Putting Life into Neolithic Houses project came together for the first cooking experiment. The original plan was to cook inside one of the reconstructed houses, as the Vlaardingen people would have done, but due to Covid 19 restrictions in the Netherlands, the experiment took place outside.

"Cooking and food preparation was most likely an important part of the daily life of the Vlaardingen people." Through excavations and (archaeological) research, we know about pot sherds, plates, grinding stones and flint tools and through food residue analysis of the food crust on the pots, we know what kind of food was eaten in the Neolithic period.

The hypothesis is that "these burnt crusts are considered to reflect the original vessel contents, the last or one of the last meals cooked in that particular pot. Through the studies of the arcaheological food crusts, we can understand how people, in prehistory, prepaired their daily meals."

The idea behind the experiment was to re-create the food crust that was found on excavated pots in Vlaardingen Culture sites. Three pots were especially made for the experiment and three meals were cooked, one in each pot. The first contained fish with guelder-rose berries, the second emmer wheat and flax seeds and the third acorns, rose hip and crab apples.

The experiment was successful. The team was able to produce food crust in all three pots with authentic ingredients. The crust was sent to another team member for a more detailed analysis. This experiments was the basis for further cooking experiments which will take place in the summer.

A more detailed description of the experiments and the results can be found in the blog post on their website.