Fundraising to launch Butser Roman Villa into the future 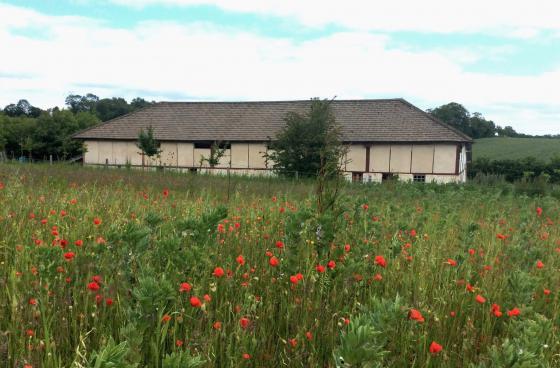 Butser Ancient Farm will soon be launching a brand new campaign to renovate their iconic Roman villa. Built in 2003, the villa starred in the famous ‘Rebuilding the Past’ documentary on the Discovery Channel, a show that was watched by thousands of people across the country. Thirteen years later, the farm now welcomes 30,000 schoolchildren and 20,000 visitors every year – and the heavy footfall is starting to show! The building is used for teaching children, special interest lectures, cookery workshops, archaeological research and as the headquarters of our own Roman re-enactment group. The Butser team are now raising money to renovate the villa and bring it back to its former glory as the home of a wealthy Roman Briton and his family.

On Saturday 27th August, they will be launching a new crowdfunding campaign to raise the first £2,000 needed to begin the renovation. To launch the campaign for the bank holiday weekend, the farm will be celebrating all things Roman with a ‘Meet the Romans!’ weekend extravaganza! There will be Roman cooking, fantastic weaponry, authentic costumes, ancient carpentry, Roman numerals and archery demonstrations, plus ancient textile demonstrations, and all the usual activities and children’s trail. Plus - cake and coffee in the visitor centre! The Butser team will also be at the South Downs National Park’s ‘Secrets of the Heath’ event in Petersfield at the beginning of September, where public can have a go at firing their giant Roman catapult.

The renovation project will allow the walls to be completed, taken right up to roof level and finished with lime plaster. The floors will be levelled and a layer of opus signinum (a sort of Roman concrete) added. Finally, the roof will be repaired and the outside of the building restored. All progress will be shared throughout the project via social media, the Butser blog, and through publicly-accessible academic research papers. The project will pave the way for future schemes on the site, such as laying authentic mosaic floors to impress the high-flyers of Roman society, and a beautiful Roman garden in the space outside the villa. These projects will also involve the help of a fantastic team of volunteers, enabling them to learn new skills and be part of a truly unique experience.