Het Verhaal van Nederland - The Story of the Netherlands 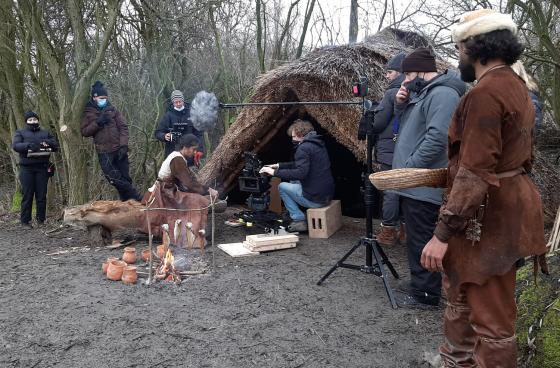 In January 2020, EXARC member Jaap Hogendoorn received a phone call from one of the executive producers from Pupkin/Tuvalu media. He was invited for a chat with the production manager, Remco van der Kant, and the line producer, Theun Termijtelen, in which they discussed the making of the high-end drama documentary about the history of the Netherlands. A ten-million Euro budget production!

They needed someone to look at the re-enactment side of the extras for the series which was new terrain for a big production like this. Jaap was more than happy to take on that job. In the first few weeks, he met with the different departments involved and gained their trust and confidence with his expertise.

“What started off as arranging living history extras, ended in using my full network to make a success of this program. Over the ten episodes I fixed over 350 extra’s but also several cast members. I made fight scenes, trained actors and extras, gave advice to the costume department and arranged many sets of clothing and accessories for the series.”

He also linked the producers with specialists like Eva IJsveld and Geeske Krusseman who helped them making the correct wardrobe for the actors. But his help didn’t end there. Jaap helped to arrange the proper props for the scenes, e. g. sword replicas or a chainmail. His knowledge of the different time periods enabled him to provide more historical information to the writers, filling the gaps, and thereby bringing more details into the series than what the producers and writers originally anticipated.

The series was completely filmed in the Netherlands with many of the locations being brought forward through Jaap’s connections and network.

He ended up being on set more than was planned but it was worth it. The first episode, aired on NPO, “Hunters and Farmers” about the Neolithic reached 2.5 million viewers.
“One of the things the program wants to achieve is that people start asking questions about history. Would it not be great if they can find those answers in books and in our (open-air) museums!”