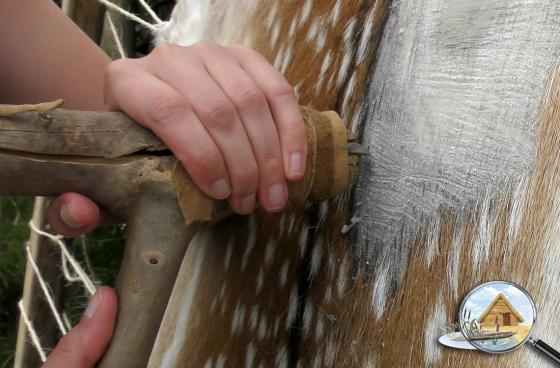 The partners of the Putting Life into Neolithic Houses project organised a hide-working experiment workshop in July 2021. This took place at Masamuda, Vlaardingen.

Diederik Pomstra gave the participants a short introduction to hide working with neolithic tools and explained the process in more detail. For this experiment, red deer and fallow deer skin was used. The hides were placed on wooden frames to be able to work on them. The first task was to remove the outer layers of the skin with flint scrapers. The tools needed to be sharpened regularly during the work.

Once the hair and outer layers of the skin were removed, the hides were soaked in water. When taken out of the water again, they were wrong out and placed into an egg-oil mixture overnight. These steps were repeated until the “hides were saturated with the oily mixture.” This way the hides were becoming soft and smooth. The last step in this process is smoking the hides. They were turned into a pouch and placed over a fire. It turned the skin amber.

“This labour-intensive and time-consuming activity gives us insights into the difference between the duration of occupation of coastal dune sites and levee sites, which are considered to be permanently occupied sites and seasonal extraction camps respectively.” The hypothesis is that time-consuming tasks like hide working were done in permanent settlements and traces of hair and flint tools found on those sites, confirming the idea.

This experiment was the first attempt of confirming this hypothesis and more research is to be done in the future.