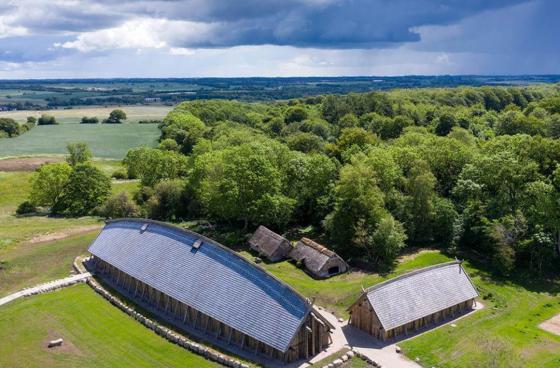 After several years of work where professionals and expert craftspeople in Sagnlandet Lejre have worked hard to recreate Viking art and reconstruct the largest building from the Viking Age found in Denmark, the day has finally arrived and you can follow along!

The official opening took place on June 17 when Sagnlandet Lejre's patron Her Majesty Queen Margrethe II from Denmark inaugurated the 61-meter-long royal hall. Only a very small selected audience was allowed to be present, and EXARCs plans to attend this event people had been waiting for for such a long time could not materialize. Instead, there was a live stream which EXARC was involved with. Unfortunately, the live event was hindered by technical issues.

However, the Danish TV2 made a great documentary which can be found online: https://nyheder.tv2.dk/samfund/2020-06-17-danmarks-stoerste-vikingehal-genopfoert-kom-med-ind-bag-vaeggene.

EXARC congratulates Sagnlandet Lejre and all people involved with a great effort and trust the building will be put to good use.