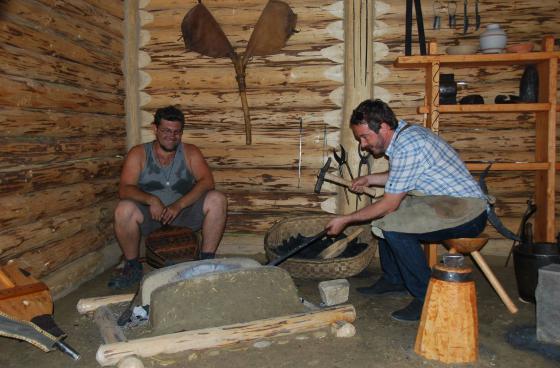 The Celtic blacksmiths were much sought after in Europe because of their perfection. Early summer, an Iron Age type blacksmith’s workshop was constructed in the crafts area of the open-air site at MAMUZ Asparn/Zaya, not far from Vienna in Austria. Finally, on 30 June, the museum director opened the workshop and the “Celtic Village” in Asparn/Zaya has its own metal workshop again – exactly what is needed in every village.

This architectural model of an Iron Age blacksmith's workshop is based on the likes of post structures from Schwarzenbach in Lower Austria, where such structures were recognised as blacksmiths' and craftspeople's houses. On account of similar structures in Hallstatt, we may also assume that craftspeople's buildings of the La Tene period were often in the form of a post structure with framework walls. Flat shingle roofs were probably suitable for use as a blacksmith's workshop.

On 30 June, the first knives and nails were forged – one can already see some finished objects in the background. One can finally experience in Mamuz in Asparn/Zaya how the smiths would have worked in the Celtic Era in the Weinviertel. The blacksmith’s workshop was taken into use during the teaching workshop “experimental archaeology” of the University of Vienna, which takes already place in the Prehistoric Museum in Asparn/Zaya for over 30 years in a row. The teaching workshop is a meeting place for archaeologists and coming-archaeologists.

In order to be able to build the new workshops, experimental archaeologists have looked into many archaeological finds to create the ideal working area. The blacksmith’s workshop is built in an area of 4.5 x. 3.5 M and has an area for the rough and an area for the fine work. Here one can see all that belongs to a blacksmith’s toolkit: anvil, fireplace, bellow, tongs, shovel, furniture and items, which are in production.

“It is very important to us to show and explain the craft, the life and also being able to try it out if production sequences in the times of the Celts have taken place in such a way”, says Dr Ernst Lauermann, scientific leader of MAMUZ. “In MAMUZ we make science tangible and understandable, like with the new smithy. Science is turned into an experience.”