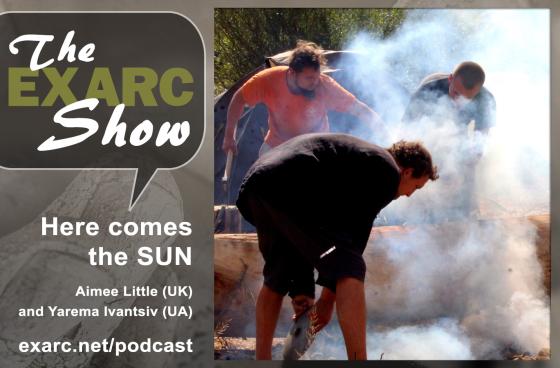 In this very special edition of #FinallyFriday, we chatted with two of the main instigators of the new Support Ukraine Network (SUN). The aim of this network is to provide support for open-air museums as well as individual experimental archaeologists and traditional craft practitioners, many of whom are currently struggling to access resources or profit from research networks due to the ongoing war. EXARC have teamed up with Ukraine based ancient craft expert and EXARC member Yarema Ivantsiv, and the YEAR Centre (York Experimental Archaeological Research, UK), directed by Dr Aimee Little. Tune in to this episode of the EXARC Show to hear a discussion from these two inspiring individuals as they talk about their own experiences, aims, and dreams in relation to this new initiative.

Dr Aimee Little is a senior lecturer in early prehistory, material culture and experimental archaeology at the University of York in the UK, and director of the York Experimental Archaeology Research Centre. Alongside her archaeological research, she has always been an advocate for diversity and inclusivity, and it was her who first approached EXARC with an initial idea for the Support Ukraine Network.

Yarema Ivantsiv is a Ukranian re-enactor with a background in tourism and historic preservation. He is the director of the NGO Chorna Galych, which is an organisation uniting re-enactors, historians, and artists through museums, historic sites, and organised events. Through his work, he aims to inspire interest in national history, the preservation and restoration of historical and cultural monuments, the revival of crafts, folk crafts, and national culture.