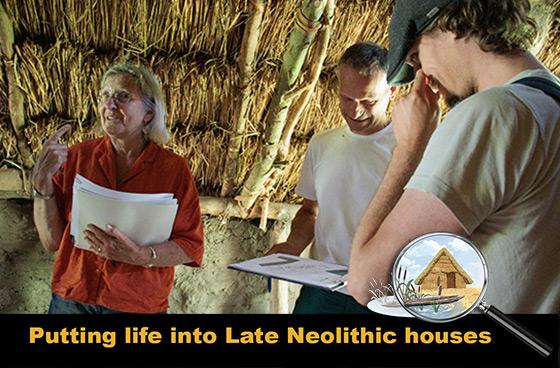 On Saturday, 2 July 2022, the team of the Putting Life into Late Neolithic Houses project came together at the Vlaardingencultuurhuis to discuss progress as well as how to proceed in the future.

Sadly, due to illness, some of the memebrs of the project could not attend. Nevertheless, the meeting was a great success in terms of discussing current tasks and upcoming ones, like furnishing the Neolithic house reconstruction at Masamuda.

The team is interested in the connection between the three sites they are investigating - Vlaardingen, Steynhof and Hekelingen - and how people moved between them. Mobility played an important role in the Late Neolithic and is an important aspect to consider when looking at the sites. More research, tests and experiments need to be conducted to draw conclusions, but there are some indicators that we might need to rethink how we see those sites, the people that lived and worked there and how these sites were used.

It might have been quiet recently on their own website, but the team has been working behind the scenes and has achieved great results so far. Archaeological reconstruction illustrator Kelvin Wilson has finished his first two scenes of Neolithic life which will be shared with the public shortly. Leo Wolterbeek and the boomstamboot team are working steadily on the dugout and the outer shape is ready. Lasse van den Dikkenberg looked into flints and fouund that most of them came originally from what is now Belgium. Lucy Kubiak-Martens, who is investigating the food crust left on pottery shards, has found that one of the main dished people in the area ate, was fish and that many, like today, burned their food from time to time! These seem like small discoveries, but they help put life in the Neolithic era into context.

One of the reaons the team met last week was to discuss how best to furnish the Neolithic House reconstruction. What did people in the Neolithic have or need to call a house a home? This question, and more, will be investigated by the team in the next few months.