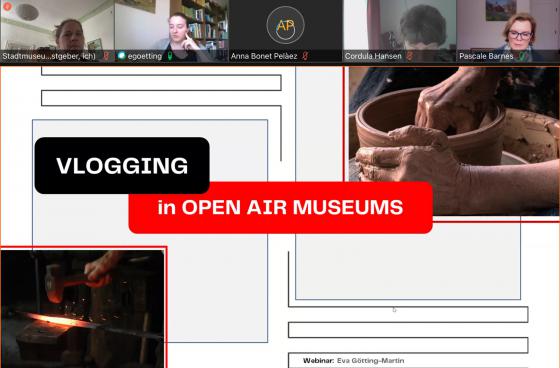 On May 21 and May 28 the RETOLD webinar “Vlogging in Open-Air Museums” took place online. In the original plan we were hoping to have it live during the conferences, however due to Covid restrictions and difficulties with travels abroad, as well as high need to have it done rather sooner than later - it was decided to go online. The workshop was organized by Museumsdorf Düppel (DE).

In the words of one of the participants:
"I recently took part in a 2 day webinar training session on Vlogging- video logging, which was offered to the different partners collaborating on the RETOLD project. Although I was a complete novice, I gained a wealth of practical information Vlogs in Part 1, such as Vlog styles, user personas and audience content, storyboarding and filming techniques which I was able to use confidently in my filming project. Part 2 focussed on creating something exciting with my video footage using editing software, as well as how to create my own YouTube channel so I could start uploading my own content. All in all this was a fantastic opportunity, very well presented with plenty of time for questions from participants and expert advice and answers from the trainer."

We talked about vlogging and video streaming in general. Participants learned how to find their target audience and create content for them. Different vlogging options suitable for open-air museums were discussed. Furthermore, we talked about styles of filming and camera angles and a short introduction into the vlogging equipment was given. At the end of the day, participants prepared their own storyboard and planed a video.

During the second day a brief introduction into the cutting and editing process was given. The participants edited and cut their video during the workshop. At the end of the course, we talked about how to upload your video, optimize your YouTube channel and promote your video.