We lost a Good Friend Today

Her extensive experience in a host of museum-related subjects meant that she had a positive contribution in many fields, a well-informed opinion leading to structural improvements.

She would assist in many things and prove the most reliable colleague one could dream of; when things would get difficult, she would be motivated to deliver. Sylvia felt comfortable at all levels: a discussion with the mayor or professor would be just as easy-going as feeding the animals: she would do what it takes.

When working for AFM Oerlinghausen (DE), she developed an education program and material for those people who need help to be included, she also wrote an article for EXARC about it, so others could pick it up as well, including a lot of background material.

What not many people know, she worked seemingly tirelessly for EXARC for many years. She did things like driving our Journal from the Netherlands to Germany twice a year, saving EXARC on postage. She would come with yellow plastic boxes from Deutsche Post and helped with putting the stamps on. Simple things which made a huge difference for EXARC.

Often, Sylvia’s role was in the background and especially in the last year, people would not see how much effort it took her to do all this. She was determined.

Sylvia knew what she stood for and made that clear to the people around her, open for other opinions. She fought many battles and did not give up easily. She could not win this one. We will miss her.

On behalf of EXARC,

Picture: Sylvia Crumbach (L) at the presentation of her BA work, 2014, published as a book, available at AFM Oerlinghausen. Photo: Roeland Paardekooper 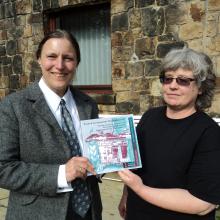 Picture: Sylvia (L) at the presentation…