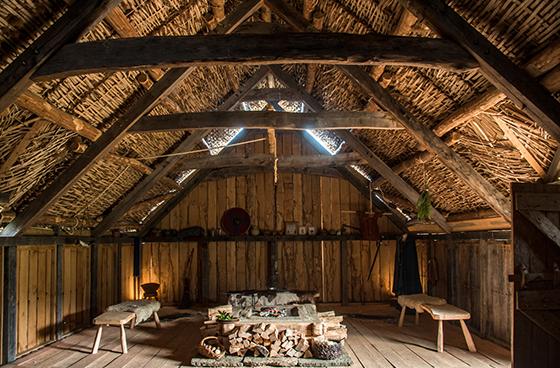 EXARC member Butser Ancient Farm opened the reconstruction of an Anglo-Saxon Hall House at the end of March 2022 on site. Dr Phil Harding had the honour to "cut the wreath" and declare the house open.

An excavation in 1970 in Church Down, Chalton revealed the foundations of the Anglo-Saxon hall that was used as the model for the reconstructed house at Butser. The exavacation in Chalton, which is in close proximity to the Farm, provided important evidence: it was able to prove that Anglo-Saxons were living in large buildings in and around 700 AD.

The house was under construction since 2018 under the expertise of Darren Hammerton (Treewright). "All timber used in the construction came from within a 10-mile radius of Butser Ancient Farm, with a combination of English oak, sweet chestnut and hazel used in the construction, whilst the roof has been thatched with water reed." Instead of nails, the building team used trunnels and tree nails to secure the construction. All material was sustainably sourced, similar to how the Anglo-Saxons would have gathered their material.

Visitors of Butser Ancient Farm can enjoy the new building from April 2022 onwards. "Over the Bank Holiday Easter Weekend Anglo-Saxons from Herigeas Hundas will be in residence bringing the two Anglo-Saxon Halls to life with crafrts, cooking and fighting demonstrations.

More information on the events happening at Butser can be found here.