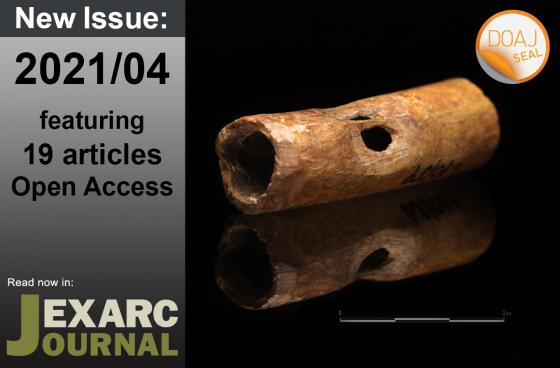 The EXARC Journal 2021/4 was published in November and contains 13 reviewed and 4 unreviewed articles. As always, all articles are open access.

Four of the reviewed articles have been presented at the EAC 12 World Tour this year and are now available in the journal. Dzwiza looks at Ancient Technologies in Contexts of the Sustainable Development Goals, Palmer investigates the weaving of an Ancient Greek chlamys; Durante, Stellacci, Pellegrini, de Angelis and Scacchetti evaluate the production and possible uses of deer antler tools in Italy and Ertl and Yoshida look at the Approaches to Experimental Pit House Reconstructions in the Japanese Central Highlands.

There are three articles on medieval bone pipes in this issue from different geographical regions – Finland (Rainio, Tamboer and Saarikivi), Poland (Popławska, Kander-Marchewka, Skibińska and Zawadzki) and England (Taylor) – investigating the tones and sounds of these musical instruments through reconstruction.

Rose, Fabian and Goren will shed light on the pure copper metallurgy of the Chalcolithic Southern Levant, Stasińska offers an insight into the textile dyeing process in Anglo-Saxon and Anglo-Scandinavian Britain, Cetwińska and Sadło let us in on their experiment to “verify the effect of adding beeswax to the adhesives.” A new approach to Roman bone artefacts is investigated in the article by Müller, Dreschler-Erb and Wojtczak. Baker, Scott, Gethin and Sinclair are introducing their pilot study on birch bark glue in Neanderthal clothing while Taylor proposes a new appearance of the iron stand from Sutton Hoo.

The unreviewed mixed matter articles look at book and event reviews. The first one discusses the Vorgeschichtliche Techniken im Archäologischen Experiment (prehistoric techniques in archaeological experiments) in the museum in Dithmarschen by Rüdiger Kelm and Birte Meller; the second review looks at the papers from the UISPP Congress in Florianópolis, Brazil published in an anthology and the third article reviews Native American Blowguns by Douglas S. Meyer. The last article in the mixed matter section reviewed the conference Novilara dei Piceni (Walk like a Picenian) which took place in Italy at the beginning of October this year.