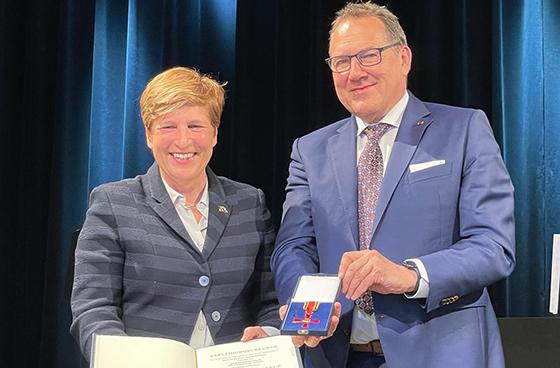 On Monday, Gunter Schöbel, founding member of EXARC and former board member (2003-2009), received the Order of Merit of the Federal Republic of Germany (Bundesverdienstkreuz) for his "outstanding and exemplary commitment to the community, exceptional work and excellent services."

In June 2021, he received a letter announcing that he was to be honoured with the Order of Merit but the pandemic and ongoing restrictions postponed the ceremony. Nine months later, on 28 March 2022, Nicole Razavi, minister of Baden-Württemberg, handed him the award on behalf of the Federal President of Germany.

Gunter's work as the director of the Pfahlbaumuseum Unteruhldingen (since 1994) which he turned into one of the most imporant research centres for experimental archaeology in Europe and his commitment to the museum, was one of the reasons he received the award. Through his passion for culture and heritage, the museum is a UNESCO world heritage site. Gunter also assisted in the restitution of Stone Age artefacts to Greece and Kyiv which had been looted by the Nazis during the Second World War.

Since 2013 Gunter is associate professor at the Pre- and Protohistory and Medieval History department at the Eberhard Karls University in Tübingen. He is also the chairman of the Europäische Vereinigung zur Förderung der Experimentellen Archäologie e. V. (European Association for the Advancement of Experimental Archaeology) (EXAR) in Germany.

In his acceptance speech, Gunter dedicates this award to inclusive cultural participation ("kulturelle Teilhabe für alle"). This idea is represented in his work "Archaeology and School" in which he, together with the educational bodies of the federal states in Germany, to improve teaching in schools. Knowledge and research schould be accessible to everyone and with his dedication to the field of (experimental) archaeology, his passion for the past and his ideas to broaden the horizon of visitors of the museum, Gunter is on the right way to make his vision a reality.

Congratulation for this outstanding award!