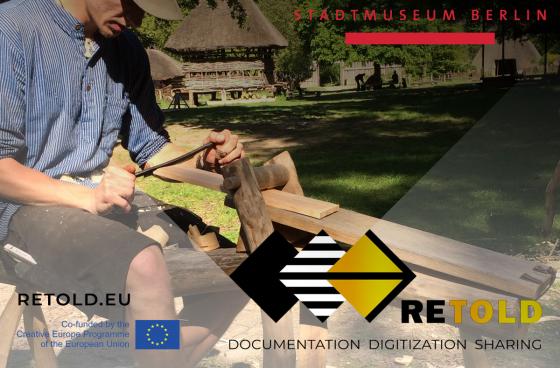 The Museumsdorf Düppel, one of the six partners in the RETOLD project, provides us with an insight into their work of the first year.

The first step, before creating the new forms for the documentation of archaeological house models, was to research documentation strategies in other archaeological and ethnographic open-air museums. This one was done together with the other partner from Romania. The results can be found in a report published in the EXARC Journal.

Once this research was done, the forms could be developed. It became clear early on that three different forms are needed to document the house (re)constructions. One for the existing house models, one form for houses during the building process and one form for annual documentation for changes, repairs and damages. The first two forms are a one-off as they describe either the current state of the house or the building process. “They are very detailed and need to be filled in by someone with experience in archaeology and/or historical building techniques.” The last form is designed less complex, the documenting process is easier and easier to manage, so no specialist is required.

The next step was testing the forms to see whether they work as intended. The Museumsdorf Düppel was the first to test them then the other museum partners within the RETOLD project and last but not least, other open-air museums outside of the project. The deadline for the feedback was December 2021 and we will be able to update you on that outcome soon. And we’re all looking forward to what 2022 brings to the project.

More information – in German – on the project and the results of the first twelve months can be found on the Stiftung Stadtmuseum Berlin website and here.