The two winners of the EXARC Experimental Archaeology Award 2022 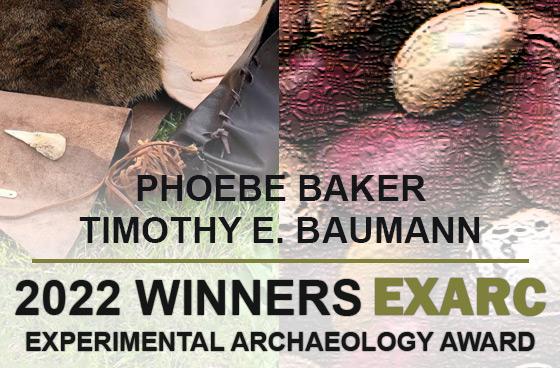 When we opened the call for funding of archaeological experiments earlier this year, by the deadline at the end of June, we received seventeen promising applications from all around the globe. The themes and approaches were truly diverse, including both creativity and acdemic rigour. Thanks to our sponsor, EXARC member, John Kiernan, the jury has been able to selected two winners of 500 EUR each: Phoebe Baker and Timothy E Baumann.

Phoebe Baker is currently taking a master's degree in Early Prehistory and Human Origins at the University of York. Her particular interest is the Neanderthal culture. In her project, Phoebe will investigate what Neanderthals wore on their feet. She will look at materials available in Middle Palaeolithic Europe and their efficacy in different combinations when used as footwear. Footwear will be created and worn by volunteers to facilitate the collection of qualitative data surrounding wear in use. This will be supported by quantitative laboratory analysis to explore strength and to understand water resistance. The aim is to show that these materials were suitable for making footwear in the Middle Palaeolithic.

Timothy E Baumann is a curator of archaeology at the McClung Museum of Natural History &Culture at the University of Tennessee. His reseaerch interests in experimental archaeology are in prehistory foodways, pottery, and stone tools from the Southeastern United States. His project will look at a way to identify the common bean (phaeseolus vulgaris) in the New World through absorbed residue in pottery. Tim will investigate several sherds from a broken, replica Mississippi Plain jar with shell tempering. The beans will be cooked in these sherds to recreate the residue and compare it with the residue found onn prehistoric pottery sherds. The aim is to provide a new established scientific method for identifying the occurence of beans across time and space in the New World.

We would like to thank the other applicants for their time to send in their proposals, it was a pleasure to read them, and we hope to hear more about your projects in the future!